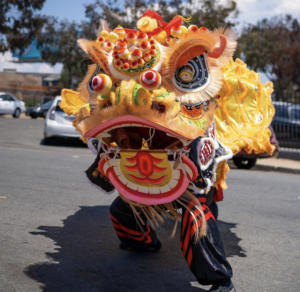 Join us as we conclude our Grand Opening weekend with a Lion Dance performance!

The Immortals are a renowned lion dance team based in the city of LA.

In the early 1960s, Jeff Chan informally established the “Chinese Lion Dancers of Los Angeles.” Jeff took in a group of kids from the L.A. Chinatown neighborhood to train them in martial arts and lion dancing. He was the first person to start his own group not tied to a family association or Gung Fu school. To this day, several of the original members still perform with their grown children.

The brightly colored costumes of the playful lions and ferocious dragons, the sounds of drums, gongs, cymbals, and the smell of incense and firecrackers delight the senses as these skilled Gung Fu fighters display their physical strength and expertise in weaponry.

In 1978, the group adopted the name “Immortals” based on the Chinese folklore of the ‘Eight Immortals’. Our group colors are Red and Black, symbolizing General Kwan Yu from the Three Kingdoms Period. General Kwan represents courage, bravery, uprightness, and loyalty. He is regarded as a peerless hero and an exceptional fighter. He is also the patron saint of Chinese martial arts.